Title: The Science of the Sudbury Neutrino Observatory (SNO) and SNOLAB 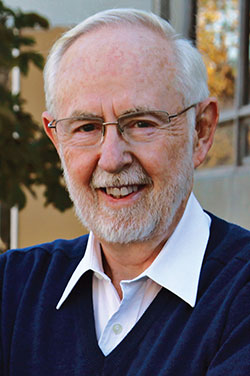 Abstract: A description of the science associated with the Sudbury Neutrino Observatory and its relation to other neutrino measurements will be given, along with a discussion of the new set of experiments that are at various stages of development or operation at SNOLAB.

About Arthur B. McDonald

Art McDonald, CC, O. Ont, O. N.S., FRS, FRSC, P. Eng, is a native of Sydney, N.S. Canada. He has degrees in physics from Dalhousie University (BSc, MSc) and Caltech (PhD) and twelve honorary degrees. From 1969-1982 he was a Research Officer at AECL Chalk River Laboratories; 1982-1989, Professor at Princeton University; 1989-2013 Professor at Queen’s University, Kingston, Canada and 2013 became Professor Emeritus. Since 1989 he has been Director of the Sudbury Neutrino Observatory (SNO) Scientific Collaboration. Among many awards, he is a Companion of the Order of Canada, Co-recipient of the 2015 Nobel Prize in Physics and the 2016 Breakthrough Prize in Fundamental Physics with the SNO Collaboration. He continues to be active in basic research in Neutrinos and Dark Matter at the SNOLAB underground laboratory. He is a member of the Board of Directors of the Perimeter Institute.

The Nobel Prize in Physics 2015 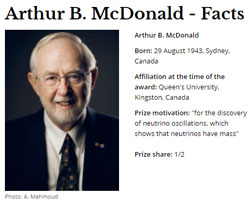 Arthur McDonald was born in Sydney, Nova Scotia, Canada. He studied at Dalhousie University, Nova Scotia and then at the California Institute of Technology, Pasadena, United States, where he earned his doctorate in 1969. His doctoral advisor was future Nobel Laureate William Fowler. He worked at the Chalk River Nuclear Laboratories near Ottawa until 1982 when he became a professor at Princeton University. Since 1989 he is affiliated with Queen's University at Kingston, Ontario. Arthur McDonald is married with four children.

Work: The Standard Model used by modern physics has three types of a very small and elusive particle called the neutrino. In an experimental facility in a mine in Canada in 2000, Arthur McDonald studied neutrinos created in nuclear reactions in the sun. Measurements showed deviations, which were explained by the neutrinos switching between the different types. This means that they must have mass. The Standard Model, however, is based on neutrinos lacking mass and the model must be revised.