Nobel lecture at by Gérard Mourou and Donna Strickland

One half of this year’s Nobel prize in physics was awarded to Profs. Donna Strickland and Gérard Mourou for their method of generating high-intensity, ultra-short optical pulses. In this last Niels Bohr Lecture of 2018 they will give back-to-back lectures about the work leading to their discovery. 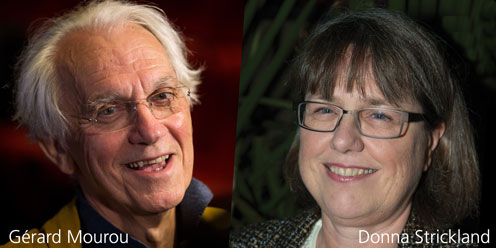 Donna Theo Strickland is professor in physics at the University of Waterloo. She worked in the laser division of Lawrence Livermore National Laboratory from 1991 to 1992 and joined the technical staff of Princeton University's Advanced Technology Center for Photonics and Opto-electronic Materials in 1992. She joined the University of Waterloo in 1997. She served as fellow, vice president, and president of The Optical Society, and is currently chair of their Presidential Advisory Committee.

Gérard Albert Mourou has been director of the Laboratoire d'Optique Appliquée at the ENSTA from 2005 to 2009. He is a professor and member of Haut Collège at the École Polytechnique and A. D. Moore Distinguished University Professor Emeritus at the University of Michigan where he has taught for over 16 years. He was the founding director of the Center for Ultrafast Optical Science at the University of Michigan in 1990.