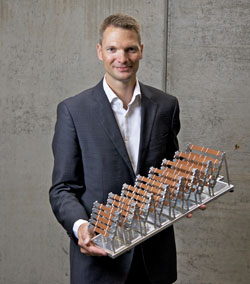 Henrik Rønnow is director of the Laboratory for Quantum Magnetism, part of the newly formed Institute of Physics (IPHYS) at the EPFL in Switzerland.

Abstract: The field of quantum magnetism forms an arena, where theoretical models and experiments on real materials meet to further our understanding of quantum many body physics. I will illustrate the unique role of neutron scattering through results on selected Cu2+ based materials serving as physical realizations of fundamental low-dimensional spin ½ models. Balancing the borderline between classical antiferromagnetic order and quantum fluctuating ground states, in some ways, theoretical description of fully quantum ground states as found in spin chains and ladders is currently more advanced than for ordered spin clusters, or even the simple 2D square lattice. The antiferromagnetically ordered unfrustrated 2D square lattice hosts behaviour not explainable by spin-wave theory. This observation from inelastic neutron scattering may provide the 'smoking gun' of so-called resonating valence bonds (RVB) that Anderson and co-workers propose to describe the enigmatic high-Tc cuprate superconductors.

As usual, coffee, tea and cookies will be served in front of the auditorium at 14:55. 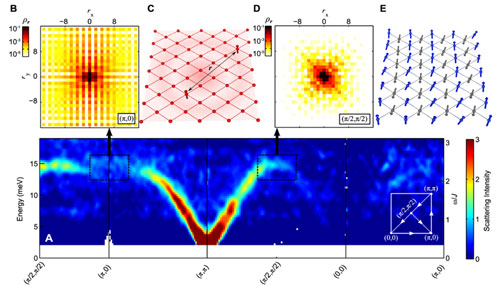 Henrik Rønnow was born in Copenhagen in 1974. He was awarded his master's degree in physics in 1996. Having earned his doctorate in 2000, he left Denmark for training at the Laue-Langevin Institute in Grenoble. Between 2000 and 2002, he held a Marie Curie Fellowship hosted by the Atomic Energy Commission. In 2002 he was appointed as an invited researcher at the NEC Laboratories in Princeton, then at the University of Chicago's James Franck Institute.

In 2003, he became a researcher at the Laboratory for Neutron Scattering (Swiss Federal Institute of Technology in Zurich) and at the Paul Scherrer Institute. In 2007 he was appointed Assistant Professor at Ecole Polytechnique federale de Lausanne (EPFL). In 2012 he was promoted to Associate Professor. He is now the director of the Laboratory for Quantum Magnetism, part of the newly formed Institute of Physics (IPHYS) at the EPFL in Switzerland.