Abstract: Most beginning chemistry students struggling with the complexities and underlying structure of the Periodic Table will simply accept the existence of the approximately 90 stable elements. Rarely does it occur to them that somewhere and in some way, all of the elements had to be synthesized. 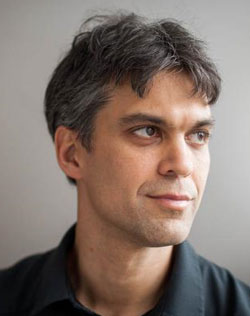 Such element generation or nucleosynthesis, through transmutation of one element into another, is a crucial byproduct of stellar energy generation. It has occurred since the birth of the first stars in the Galaxy, and without it life on Earth would not be possible. Although the general picture of element formation is well understood, many questions about the nuclear physics processes and particularly the astrophysical details responsible for forming the heavier elements such as platinum and gold remain to be answered.

Here I focus on advances in our understanding—still very incomplete— of the origin of the heaviest and rarest elements in the Universe.

Enrico Ruiz-Ramirez's primary research is high-energy astrophysics. He is particularly interested in understanding the physics of extremely compact objects such as black holes and neutron stars. He also conducts research into radiation processes, including gravitational waves. He uses computer simulations for the exploration of violent phenomena in the universe.

He received his Ph.D. in astrophysics and astronomy at the University of Cambridge, followed by a post-doctoral fellowship at Princeton University. He joined the UC Santa Cruz (UCSC) faculty in 2007.

Ruiz is spending the 2014-2015 academic year as a fellow at the Radcliffe Institute for Advanced Study at Harvard University, where he is continuing his own research and collaborating across a wide range of artistic and scientific disciplines with other participants in the program.

Enrico is the winner of numerous prestigious research prizes, among them a Packard Fellowship and the National Science Foundation CAREER Award. He has collaborated substantially with the Dark Cosmology Centre (DARK) since 2007 as a Sophie and Tycho Brahe Professor, hosting workshops and mentoring PhD students. He was appointed Adjunct Professor at the Niels Bohr Institute in 2014.