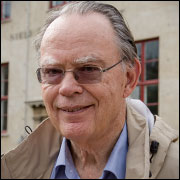 I read and speak Danish, English, French and German and writes Danish and English

I finished my studies at the university of Copenhagen in January 1965. I was in the following half year "kandidat" instructor at the same at I took "pædagogikum" in order to be able to teach at high schools. I became CERN fellow in August the same year and later CERN fix term staff. I was during this time at the university of Illinois, Champaign-Urbana, USA for two years. I returned to the Niels Bohr Institute in October 1972 where I have been since. During this time I have often been at CERN for longer and shorter periods.