The High Energy Experimental Particle Physics effort at the Niels Bohr Institute is concentrated around accelerator-based particle physics. Our main effort in these years is the ATLAS experiment at CERN, the world's leading laboratory for particle physics research.

High Energy Particle Physics is the field of physics that investigates the fundamental structure of the Universe by studying its fundamental constituents, the elementary particles and forces.

The low-energy behavior of matter is well known and described satisfactorily by atomic physics or solid-state physics. The high-energy behavior, relevant to describe the physics of the early universe, is currently studied by bringing matter to the extreme energies, as reached in particle accelerators or observed in ultra-high-energy cosmic rays, and is described by the still incomplete theory of particle physics called the Standard Model.

CERN facilities, such as the Large Hadron Collider, have the main purpose to help us complete the theory and describe the particle physics of the early universe. 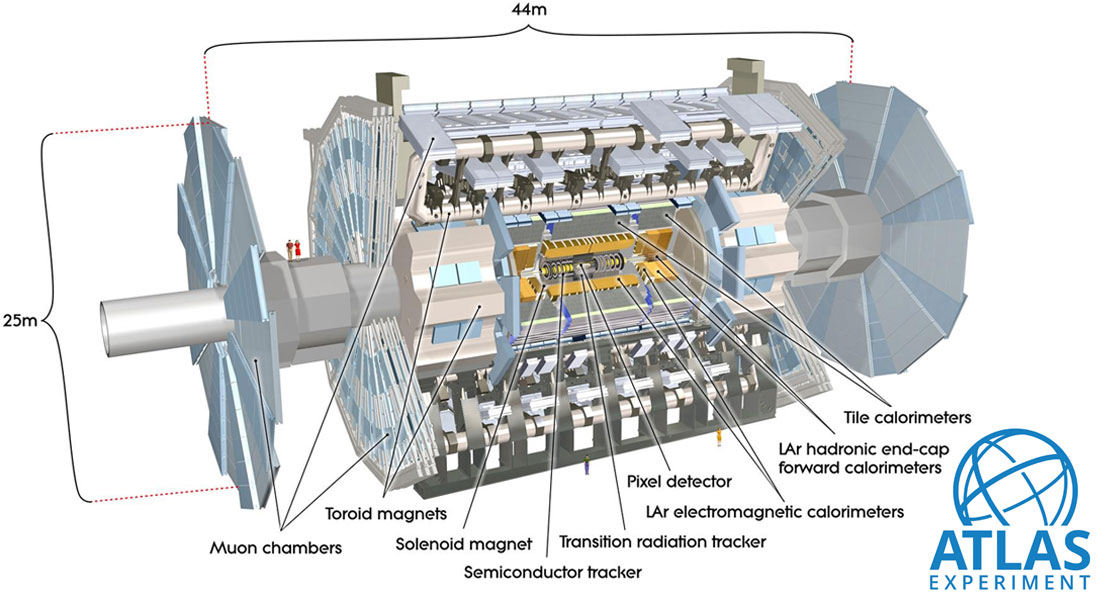 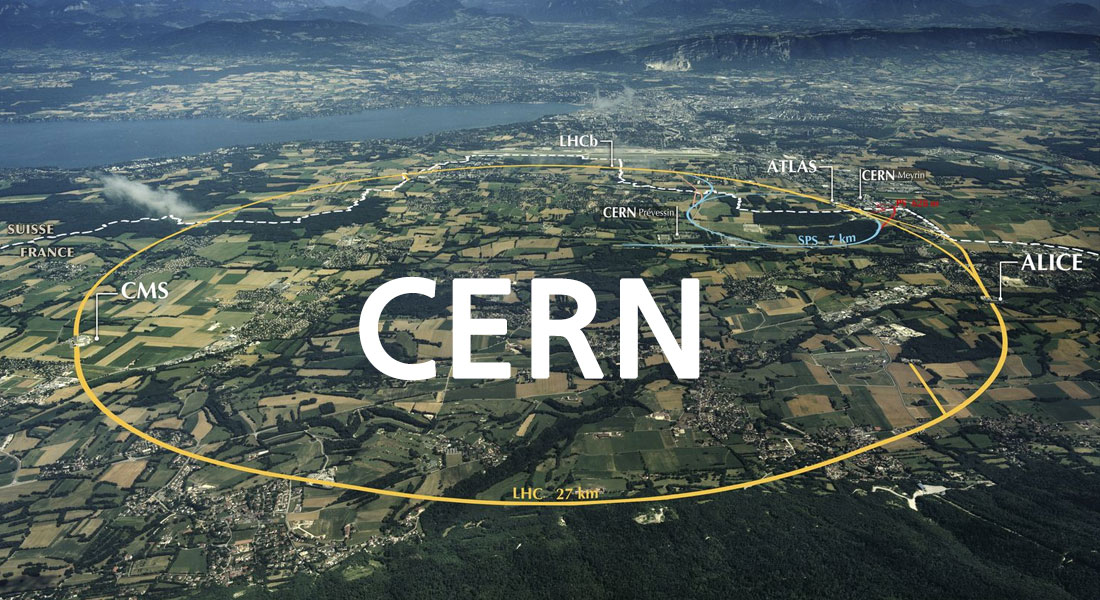 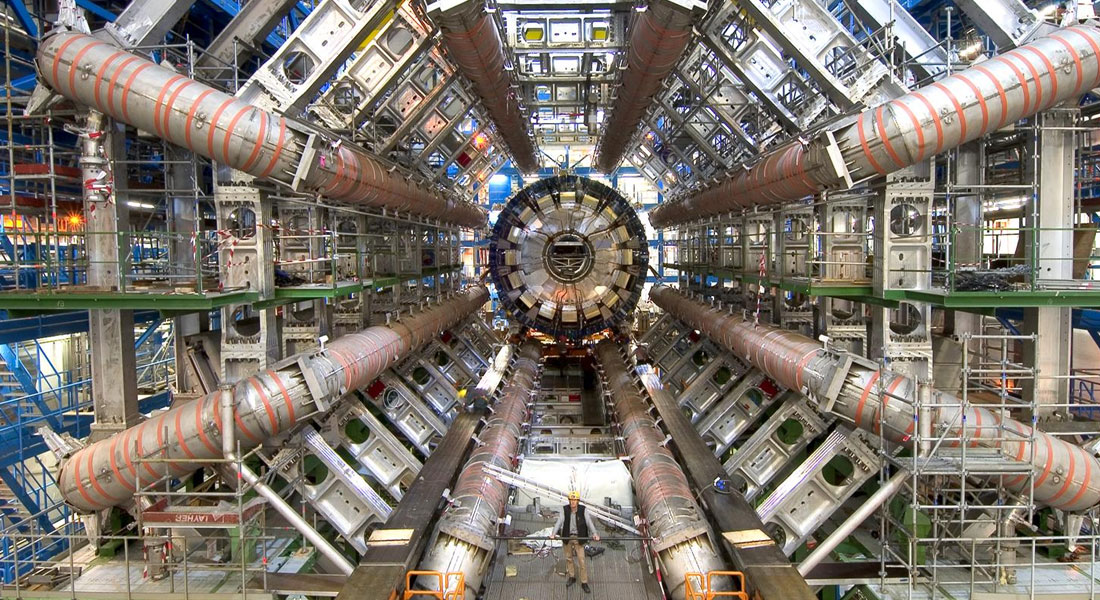 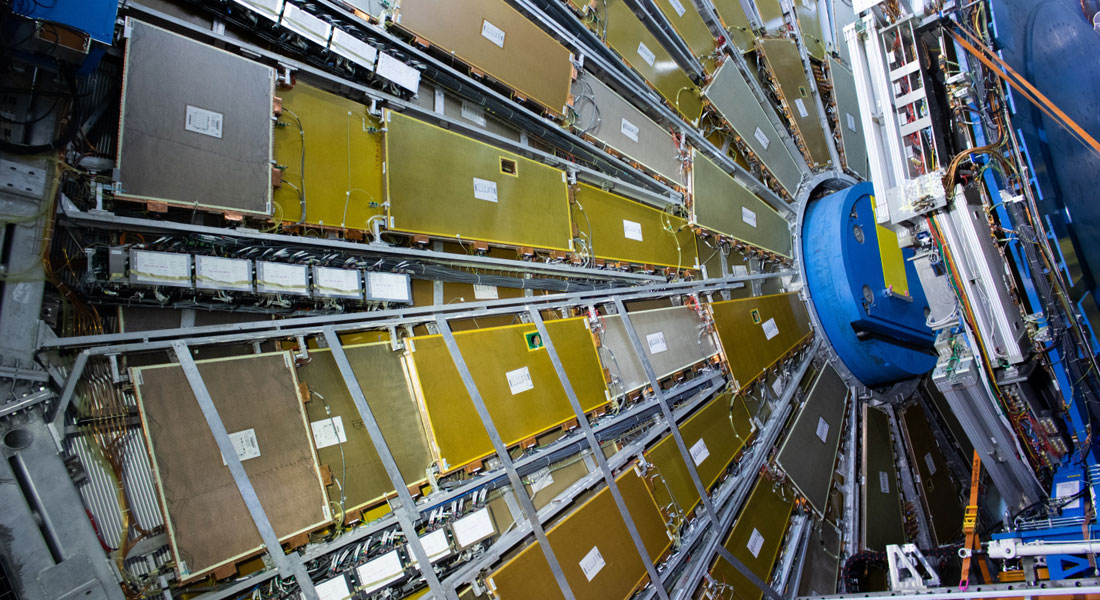 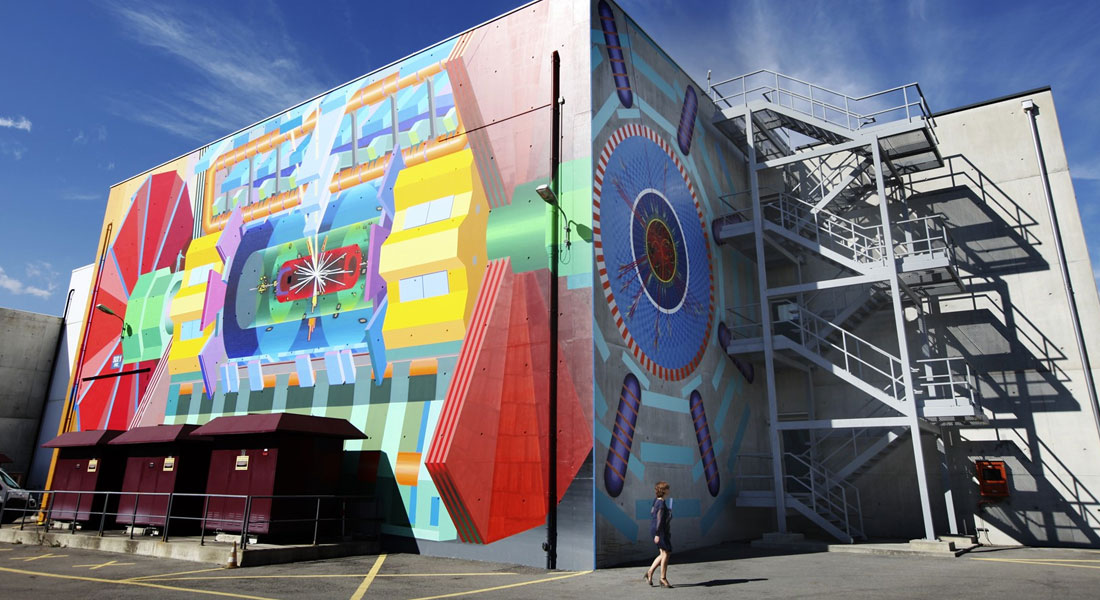 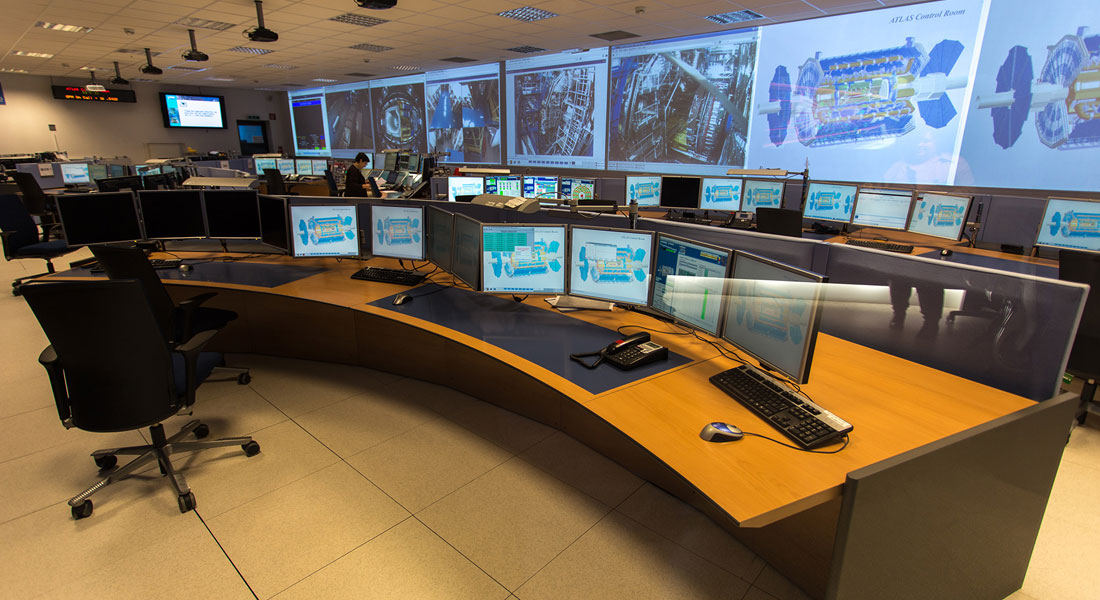 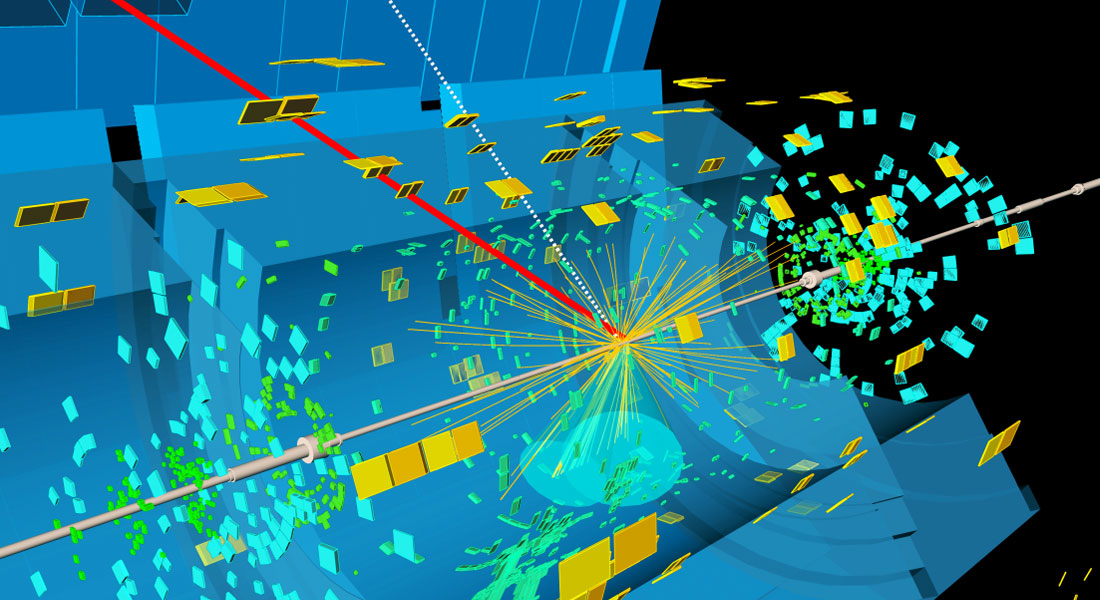 The ATLAS group at the Niels Bohr Institute is active in several areas of the experiment: data analysis and theoretical interpretations of the results; Transition Radiation detector and trigger system design; detector and trigger design upgrades for the High Luminosity LHC.  Check under “Research” tab for more details.

About the ATLAS experiment >>

Since the beginning of the LHC, NBI is member of the ATLAS collaboration, and several ATLAS NBI members hold positions of coordination in physics, trigger and detector activities.

The ATLAS collaboration  includes 3000 scientific authors from 183 institutions around the world, representing 38 countries from all the world’s populated continents. 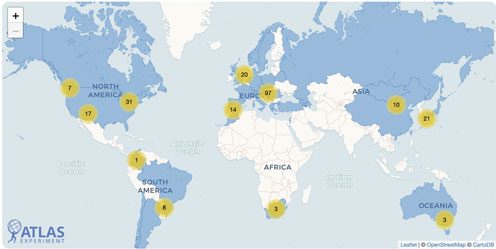 NBI's participation in ATLAS is made possible through NICE (National Instrument Center for CERN).

ATLAS is a particle physics experiment at the Large Hadron Collider at CERN. The main goal of ATLAS is to discover new properties of elementary particles and forces in the head-on collisions of protons of extraordinarily high energy.

ATLAS data will teach us new properties of the elementary forces and particles that have shaped our Universe since the beginning of time and that will determine its fate.

We have big, unexplained observations about Nature, which only elementary particle physics can answer: 25% of the universe energy content is made of dark matter, and its elementary nature is unknown; neutrinos have a ridiculously low mass value, and we don’t understand why; the asymmetry between the amount of matter and anti-matter content of the universe is a complete mistery, and remains unexplained.  Finally, we do not have a theory of quantum gravity, which is needed to describe the physics of the early universe.

Besides finding answers to unexplained observations, ATLAS also aims at an in-depth investigation of the Higgs boson's properties and thereby of the origin of mass for elementary particles.

More about the ATLAS experiment can be found at http://atlasexperiment.org

In the following we describe the areas of research where we are active. 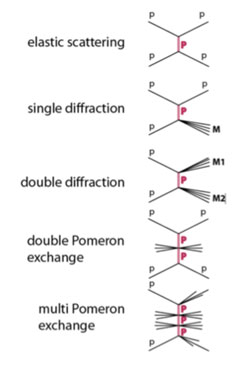 Processes such as single diffractive interactions between protons are presently inaccessible to perturbative QCD calculations but they can be studied experimentally in ATLAS by means of a detector system, ALFA, placed 250m away from the interaction point inside the beam-pipe where it can measure beam protons that have been scattered by an extremely small (forward) scattering angles. The data from dedicated running periods of the LHC, where this detector has been turned on, allow such studies. The importance of such studies arises from the need to model accurately the pile-up effect of many simultaneous proton collisions at the LHC, and also from the need for accurate predictions of the interactions of ultra-high energy cosmic rays with the atmosphere. The ATLAS NBI group plays a major role in the detector operation and the data analysis of ALFA.

After the discovery of the Higgs boson and the determination of its mass (the last free parameter of the theory), the Standard Model is completely determined, including the relations between the masses and the interaction strength of the Higgs field to the elementary particles. 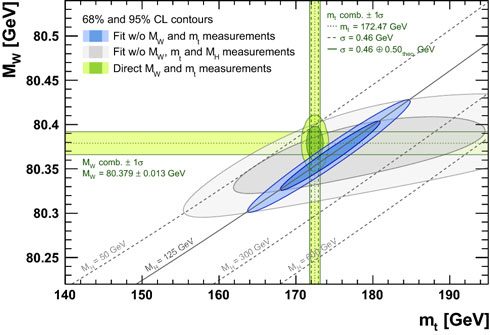 It is a main goal of the ATLAS experiment to measure the fundamental strength of the new discovered force, the Higgs field, to particles with the highest accuracy, since the tiniest departure from predictions would be a clear a sign of physics beyond the Standard Model.

With the huge data samples collected from the second running period of the LHC (Run2) , we aim at measuring the Higgs decay rates as well as the W and Z self-interactions with significantly higher precision than before. Furthermore, new ways open up for measuring the top quark mass and the W boson mass, as illustrated above. The ATLAS NBI group has a strong involvement in measurements of Higgs decays to boson and fermions, and of di-boson production rates, as well as top and W mass measurements.

The high intensity and the unprecedented energy of proton collisions at the LHC allow us to test new theoretical ideas, in the attempt to explain the big observations mentioned (dark matter, neutrino masses, matter anti-matter asymmetry, etc..). 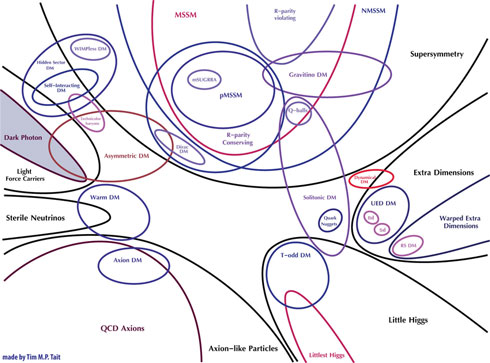 Searches for new heavy particles, such as long lived particles predicted by Supersymmetry, or search for violation of conserved quantum numbers such as lepton number or assumptions such as lepton universality, are only a few examples of what the LHC allows us to test and the ATLAS NBI group currently focuses on.

In 2026, the LHC will be upgraded to provide higher intensity of beams and unprecedented amount of data collected. Detectors will require upgrade as well. The ATLAS NBI group is involved in the upgrade of the ATLAS detector (the figure shows the new inner tracker) for HL-LHC, which will start operation in 2027. 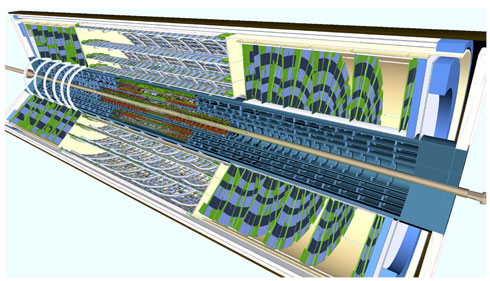 The tracking detectors will receive major upgrades, and will pay a crucial role in the online analysis. The trigger system will in fact be upgraded to use tracking information right after the L0 (first and coarser level of selection). One solution currently pursued is a Hardware Tracker Trigger (HTT). The ATLAS NBI group plays an important role in both upgrade projects.

Advances in IT technology have enabled the application of new machine learning algorithms to classification problems. 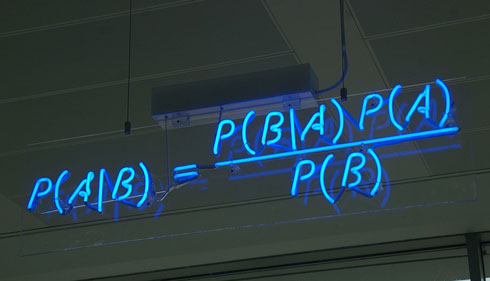 These can be applied to all kinds of problems and we work actively in several interesting projects for example, deep neural networks in the reconstruction of particles or in the strategy for searches of new physics phenomena. Recent activities have included electron and tau identification, top mass determination and vertex reconstruction, and recursive neural networks in lepton flavor violation measurements.