Congratulations to Arianna Marchionne who succesfully defended her PhD thesis at Centre for Ice and Climate on 3 November 2016. 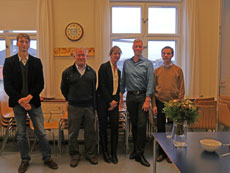 Abstract: According to Milankovitch theory of ice ages, glacial cycles are driven by variations in the insolation, i.e. the amount of the incoming solar radiation reaching the Earth. These variations are associated with variations of the Earth’s orbit. Many attempts have been made to identify the inﬂuence of the orbital variations on Earths climate; however, the knowledge and tools needed to complete a uniﬁed theory for ice ages have not been developed yet.
Here, we focus on the climatic variations that have occurred over the last few million years. Paleoclimatic records show that the glacial cycles are linked to the orbitally driven variations in insolation. How­ever, the relationship is far from linear, and insolation alone can not explain the climatic variability seen in the records.
In the ﬁrst part of this thesis, we discuss the possible dynamical mechanisms for linking the frequencies observed in the records to those present in the astronomical forcing. We shall do this in terms of a general framework of conceptual dynamical models, which may or may not exhibit internal self-sustained oscillations. We introduce and discuss two distinct mechanisms for a periodic response at a diﬀerent period to a periodic forcing. In one case, the system has the ability of maintaining internal oscillations. In the second case, the system is damped, so it does not possess self-sustained oscillations.
The distinction between the two scenarios mentioned above is un­derstood in terms of two phenomena in oscillating systems, namely the phenomenon of resonance and that of synchronisation. To avoid con­fusion between them, we illustrate the main diﬀerences, and present a listing of their characteristic properties. A Duﬃng and a Duﬃng-Van der Pol oscillator have been used for illustrative purposes.
The second part of this thesis addresses the analysis of nonlinear resonances in a weakly-damped Duﬃng oscillator. In addition to al­ready known odd and even subharmonic resonances, we combine the physical concept of subharmonic resonances and mathematical con­cept of bifurcations to uncover a novel resonance type.
In the last section, we discuss a third possible mechanism for the climate response to an external periodic forcing. In this scenario, the system is excitable: a small perturbation from the ﬁxed point may produce large excursions.