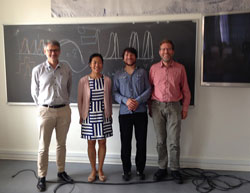 The thesis presented by Corentin deals with triple isotopic composition of oxygen in air enclosed in ice cores in order to study millennium changes and to investigate causes for this short-term variations.

An up-to-date review of the present state of knowledge on the three isotopes of atmospheric oxygen is given. The PhD thesis investigated not only experimental but also modelling tasks. The combination of an AOGCM and an AGCM with enabled stable-water-isotopes helped to understand the millennial-scale variations of δ18O during the last glacial period. The goal was to understand the interaction between atmosphere, land and ocean, and between Greenland and the tropics, with a focus on the atmospheric hydrological processes. The results reveal that atmospheric molecular oxygen isotope variations could indicate shifts in strength and location of monsoon activities.

Corentin will continue as Lab. Technician at Centre for Ice and Climate.

Title and abstract of the PhD thesis:

Owing to its 1200 yr lifetime, atmospheric oxygen (O2) is a global tracer of biological and hydrological processes. The dominant source of O2 is located in the the low latitudes, where most of the O2 production/uptake occurs. Atmospheric O2 can therefore provide valuable information on the tropics, a region of the world which still lacks of climatic reconstructions and whose role is widely debated in the context of millennial-scale climate variations. Atmospheric O2 is enriched in heavy isotopologues (_17O , _18O ) relative to O2 in ocean water, the ultimate source of O2 for photosynthesis. The processes causing enrichment of 17O/16O and 18O/16O isotope ratios involve the biological cycle, the water cycle, global ice volume/sealevel variations, climatic conditions and stratospheric photochemistry. It is thus essential to estimate the relative importance of these processes to unleash the potential of O2 isotopologues as global tracers of past changes in the climate system. The evolution of the past atmosphere can be retrieved from the air bubbles occluded in polar ice cores back to 800 kyr. However, elemental and isotopic fractionation processes alter O2 isotope ratios during the transport and entrapment of air in the porous layer (firn) on top of the ice sheets, during storage and during the experimental analysis. An understanding of these non-climatic mechanisms is a prerequisite for a correct interpretation of gases preserved in ice cores.

The work presented in this thesis focuses on the past evolution of stable isotopes of atmospheric oxygen from the technical aspects of the measurements of O2 isotope ratios to the interpretation of their past variations. First, we present the O2 cycle and describe the results of process-based modeling studies aiming at reproducing the observed enrichment in atmospheric _18O and 17Δ (17Δatm = ln(δ17Oatm)−0.516 · ln(δ18Oatm). We review the current understanding of past orbital and millennial time-scale variations of atmospheric O2 isotopes. We also give a description of air transport and associated processes in the firn, which alter the climatic signal preserved in ice core bubbles. Second, a very high analytical precision and accuracy is required to measure the past variations of _18Oatm and especially 17Δatm preserved in ice core bubbles. One must primarily have the ability to measure variations as small as 10 permeg (0.01 h), corresponding to the millennial-scale changes observed in 17Δatm . O2 needs to be separated from other atmospheric constituents to achieve such a level of precision. This motivated us to develop a new method of O2 separation, based on membrane technology. We verify its 100 % selectivity to O2 , and estimate its O2 permeability. This method is currently not applicable to 17Δatm measurements due to sealing issues and variable isotope fractionation during O2 permeation across the membrane. Third, a semi-automated, offline experimental setup for _18Oatm and 17Δatm measurements was build up from scratch as an alternative, based on the conventional method relying on gas chromatograph (GC) separation of O2 and nitrogen (N2 ). It includes air extraction from ice, standard introduction and cryo-collection at 12 K (with a closed Helium cooler) of an O2 /Argon (Ar) mixture, after separation from water (H2O ), carbon dioxide (CO2 ) and N2 . The GC unit can be bypassed for _18Oatm measurements in a dried and CO2 -free air mixture. We give an overview of the units and controls of the experimental setup, and detail the developed procedure to extract, purify and collect atmospheric O2 from ice core samples. Fourth, the external precision of the setup, or the reproducibility of ice core _18Oatm measurements is estimated with 21 Late Holocene Neem (Greenland) ice core samples from the same depth. A melt-extraction method is applied on these large samples (⋍ 30 g) and _18Oatm , _O2/N2 and _15N are measured in an O2 /N2 /Ar mixture by isotope ratio mass spectrometry in dual inlet mode. We describe the automation of a measurement sequence of up to 10 ice core samples. The scatter observed in the raw _18Oatm and _O2/N2 underlines the occurrence of gas loss fractionation processes in ice core samples. We detail the method of data-processing, its associated uncertainty and the strategy employed to correct for non climatic effects.

Based on zero-enrichment tests, the internal precision of DI measurements of _18O and _15N is 0.008h(1 σ) and 0.005h(1 σ). A similar precision is reached with individual ice core sample measurements. Based on the 21 Neem ice core samples, the ability of the analytical system to reproduce _18Oatm and _O2/N2 is estimated as 0.028h(1 σ) and 0.021h(1 σ), respectively. Fifth, thanks to improving isotope measurement techniques, millennial scale variations of _18Oatm and 17Δatm preserved in polar ice cores have been revealed. In particular, a systematic _18Oatm increase is recorded during Heinrich stadials (Greenland stadials during which a Heinrich event occurs). Because of its global character, _18Oatm provides added value compared to the different local records of hydrological cycle variations in different continental and marine archives. However, until now, no quantitative, robust interpretation of past variations in _18Oatm has been established, which limits the use of _18Oatm as a quantitative indicator for past biospheric production or variations of the hydrological cycle. Here, we quantify the response of _18Oatm to such millennial events using a freshwater hosing simulation performed under glacial boundary conditions. Our O2 isotope mass balance model takes into account the latest estimates of isotope fractionation factors for respiratory and photosynthetic processes, and makes use of atmospheric water isotope and vegetation changes obtained with the general circulation model IPSL-CM4. The atmospheric component of IPSL-CM4 is fitted with a water isotope module (LMDZ4), and its land component, the dynamic global vegetation model ORCHIDEE, is run offline. Our modeling approach reproduces the main observed features of a Heinrich stadial in terms of climatic conditions, vegetation 2 distribution and _18O of precipitation. We use it to decipher the relative importance of the different processes behind the observed changes in _18Oatm . Our results highlight the dominant role of hydrology on _18Oatm and confirm that _18Oatm can be seen as a global integrator of hydrological changes over vegetated areas. This work has been published in Climate of the Past in 2015 under the title Quantifying molecular oxygen isotope variations during a Heinrich stadial.