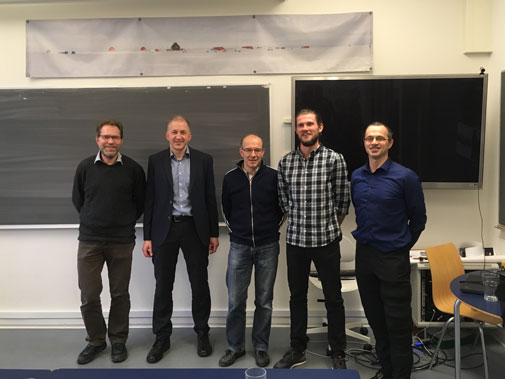 Congratulations to Malte Normann Winther at Centre for Ice and Climate who succesfully defended his PhD thesis on Tuesday 31 January 2017 and obtained the degree of Doctor of Philosophy.

"In Malte´s Ph.D. project he performed continuous measurements of the isotopic evolution of nitrous oxide from incubated pure bacterial strains. The results from these continuous measurements was compared to previous studies before they were used in the analysis of gas measurements from past atmospheric air samples (from NEEM ice core measured at IMAU, the Netherlands) and from present day gas samples from different terrestrial ecosystems. This Ph.D. was an interdisciplinary Ph.D., and Malte collaborated therefore in large parts with the terrestrial ecology department at Biology."

Malte will continue as postdoc at Centre for Ice and Climate.

Title and abstract of the PhD thesis:

Trace gas evolution in the present and past atmosphere

Abstract: Nitrous oxide (N2O) is a very important trace greenhouse gas in the atmosphere. With an increasing atmospheric concentration of 327 ppb at present, and a warming potential 300 times that of CO2, the signiﬁcance of N2O has been rapidly increasing since the 1950s. It is generally known that N2O primarily originates from microbial production in terrestrial and aquatic ecosystems. In this thesis I present measurements of the intramolecular distribution of 15N in N2O given as site preference (diﬀerence in abundance of the isotopomers), δ15Nbulk (average abundance of the isotopomers), and measurements of δ18O-N2O. The isotopes of N2O are used in investigations of both the speciﬁc reactions pathways inﬂuencing N2O emis­sions and the general evolution of N2O.
In Part II, I presents continuous incubation experiments with the two primary microbial communities responsible for N2O production. The two microbial communities have been studied numerous times, but to the best of our knowledge never continuously. Continuous measurements of the microbial evolution of N2O is possible due to the recent instrument development of a cavity ringdown spectroscopy-based analyzer, which allows for continuous position dependent 15N measurements. Continuous incubation experiments are presented with nitrifying bacteria Nitrosomonas mobilis revealing strong indications of N2O production from diﬀerent chemical reactions. The measurements revealed a three step site preference pattern in the range of nitriﬁcation and denitriﬁcation and we therefore suggest that Nitrosomonas mobilis is of the bacterial community nitriﬁer denitriﬁcation. The experiments furthermore revealed the bacterial potential for cyclic use of the most abundant substrate rather than the most energy eﬃcient.Continuous incubation experiments with denitrifying bacteria are also presented with Pseudomonas ﬂuorescens (producing and reducing N2O) and Pseudomonas chlororaphis (only producing N2O). Measurements revealed a clear transient pattern of KNO3 to N2O and KNO3 to N2O to N2 for the two bacterial species, respectively. A Rayleigh type distilla­tion model modiﬁed for isotopomers and simultaneous reduction, allowed for determination of isotopic fractionation values during both production and reduction of N2O, comparable to previous studies.
In Part III, I present measurements of ice core samples analyzed for isotopes of N2O. Ice samples from three time periods of the Holocene and one from the glacial were selected and measured for isotopic composition of N 2O using isotope ratio mass spectrometry. The analysis resulted in isotopic variations comparable with previous ﬁndings of site preference, δ15Nbulk, and δ18O-N2O. Source identiﬁcation analysis using the isotopic composition re-sulted in a discussion of the primary source region being nitriﬁcation in aquatic ecosystems, while inclusion of the stratospheric sink eﬀect leads to heavy depletion in all isotopes, hence shifting the primary source region towards denitriﬁcation in terrestrial ecosystems.
In Part IV, I present N2O measurements from ﬁeld studies performed 1) on the Arctic tundra and 2) on an inclined temperate slope. 1) Previous studies has shown that large amounts of N2O is being emitted after thawing of permafrost. We investigated a downslope site covering a moisture gradient area in the arctic tundra. Moss-covered sites revealed high nitriﬁcation potential, low nitrate levels, and emission of denitriﬁcation marked N2O. The natural nitrogen cycle in the arctic is therefore hypothesized to reduce the atmospheric N2O concentration by denitriﬁcation, which contrasts the opening nitrogen cycle in temperate and tropical areas. 2) On an inclined temperate slope N2O emission variations were investigated on a mesoscale range. A temperate changing interface with oxic nitriﬁcation enhancing conditions upslope and anoxic denitriﬁcation enhancing conditions downslope was discovered with high N2O production.