The birth of a new research field
The fundamental idea of using ice cores to study past climate was conceived by Willi Dansgaard in the early 1950s in the very same building where Centre for Ice and Climate is located today. In 1952, Willi Dansgaard had discovered that the amount of heavy oxygen isotopes in precipitation correlates with the temperature at the location where the precipitation is formed.

The prophecy
Realizing that the technique could be used to derive information on past climate conditions from layers of old precipitation stored in ice caps, Willi Dansgaard made the following statement in 1954:

In certain areas on the Greenland Ice Cap is a distinct layer formation
caused by melting in the summer season. On the supposition that the
character of the circulatory processes, in all essentials, have not varied
over a long period of time, the above, in the opinion of this author,
offers the possibility by measurements of the af (i.e. the amount of the
heavy oxygen isotope) in these layers of ice to determine climatic
changes over a period of time of several hundred years of the past. ...
An investigation will be undertaken as soon as the opportunity offers.
Willi Dansgaard, The O18-abundance in fresh water, Geochim. et Cosmochim. Acta 6, 1954

Little did he expect that this idea would be the foundation of an entire branch of climate physics, leading to several ice core drilling projects that determined climatic changes not hundreds, but hundred thousands years of the past.

Testing the idea
During the 1950s and early 1960s, Willi Dansgaard made experiments with ice from icebergs picked up at the Greenland coast and precipitation samples from a global network of meteorological stations. He also obtained snow samples from the EGIG expedition that traversed the Greenland ice cap during the 2nd Polar Year 1957-58. All these measurements confirmed that the amount of heavy oxygen isotopes in precipitation samples correlates with temperature.

An opportunity offers
The final line of the quote above contains a good portion of wishful thinking, for how often does an opportunity to study layers of old ice in the Greenland ice cap show up?

Well, in this case, it actually did show up 12 years later! In 1964, Willi Dansgaard visited the American Camp Century base, build into the ice 100 miles from the Thule Air Base in NW Greenland. The purpose of the visit was to sample deep layers of snow for measurement of the 32Si content, but during the visit he learned that the US Army Cold Regions Research and Engineering Laboratory (CRREL) was drilling through the Greenland ice cap at Camp Century. However, he did not get to see the drilling, that was considered a military secret. Upon completion of the drilling, Willi Dansgaard applied for permission to perform oxygen isotope measurements on the Camp Century core. With the support of Dr. Chester C. Langway, Jr., from CRREL, permission was granted, and a long and fruitful scientific and logistical cooperation between Danish and American groups was thereby initiated.

The first climate curve from an ice core
Results from the analysis of the Camp Century ice core showed that past climate conditions could indeed be derived from ice cores. 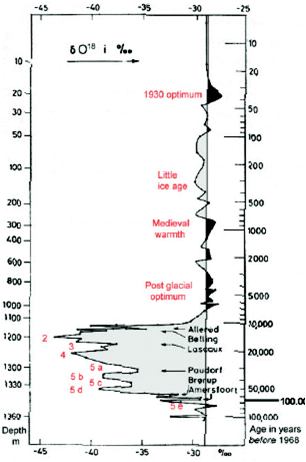 The graph to the left shows the amount of heavy isotopes (given as a δ18O value) as a function of depth and age along the 1390 meter long ice core.

Low δ18O values are associated with low temperatures and vice versa, and the shift of δ18O values at 11-1200 m / 11,000 years is the shift from the glacial to the current interglacial.

Different episodes of past climate could be identified (red and black labels).

Although the results were impressive, the most important outcome from the analysis of the Camp Century ice core probably was the demonstration of the fact that ice core drilling and the oxygen isotope method were indeed viable ways of reconstructing past climate.

More ice coring
Backed up by the successful Camp Century results, Willi Dansgaard obtained access to the DYE-3 radar station on the ice cap in South Greenland, where the first purely scientifically motivated deep ice core drilling project was carried out from 1979 by an American-Swiss-Danish consortium. With the completion of the DYE-3 drilling in 1981 and the subsequent analysis of the core, ice core science was established as a cornerstone in the study of the climate of the past.

New centre, old traditions
Willi Dansgaard's research group has changed name several times, and Willi Dansgaard himself retired in 1992. The research group is now led by Professor Dorthe Dahl-Jensen, and turned into Centre for Ice and Climate following the 2007 grant from the Danish National Research Foundation.

Read more
-  Willi Dansgaard's autobiographic book Frozen Annals.
-  Chester C. Langway, Jr., tells his story in The history of early polar ice cores
-  Lolck, M. 2005, Danish Ice Core Research 1952 - 1982, in Proceedings of the ICHM Conference From Beaufort to Bjerknes and Beyond: Critical Perspectives on the History of Meteorology, International Commission on the History of Meteorology.
-  The booklet CRREL's first 25 years by Edmund A. Wright tells the background story of the Camp Century project and other of CRREL's activities.