By enabling us to see neutrinos from outer space, IceCube opens an entirely new window to study our universe. Neutrinos can be thought of astronomical messengers, which can carry information on astrophysical phenomena that would otherwise be hidden from traditional optical astronomy.

Combined with the informations received from other messengers, such as gamma rays, cosmic rays or gravitational waves, the high-energy neutrinos detected by IceCube have the potential to answer many standing questions in astrophysics and cosmology. Experimentalists from the Discovery Center, and theorists from the Niels Bohr International Academy work together in order to better understand the links which bind together multi-messenger observations. 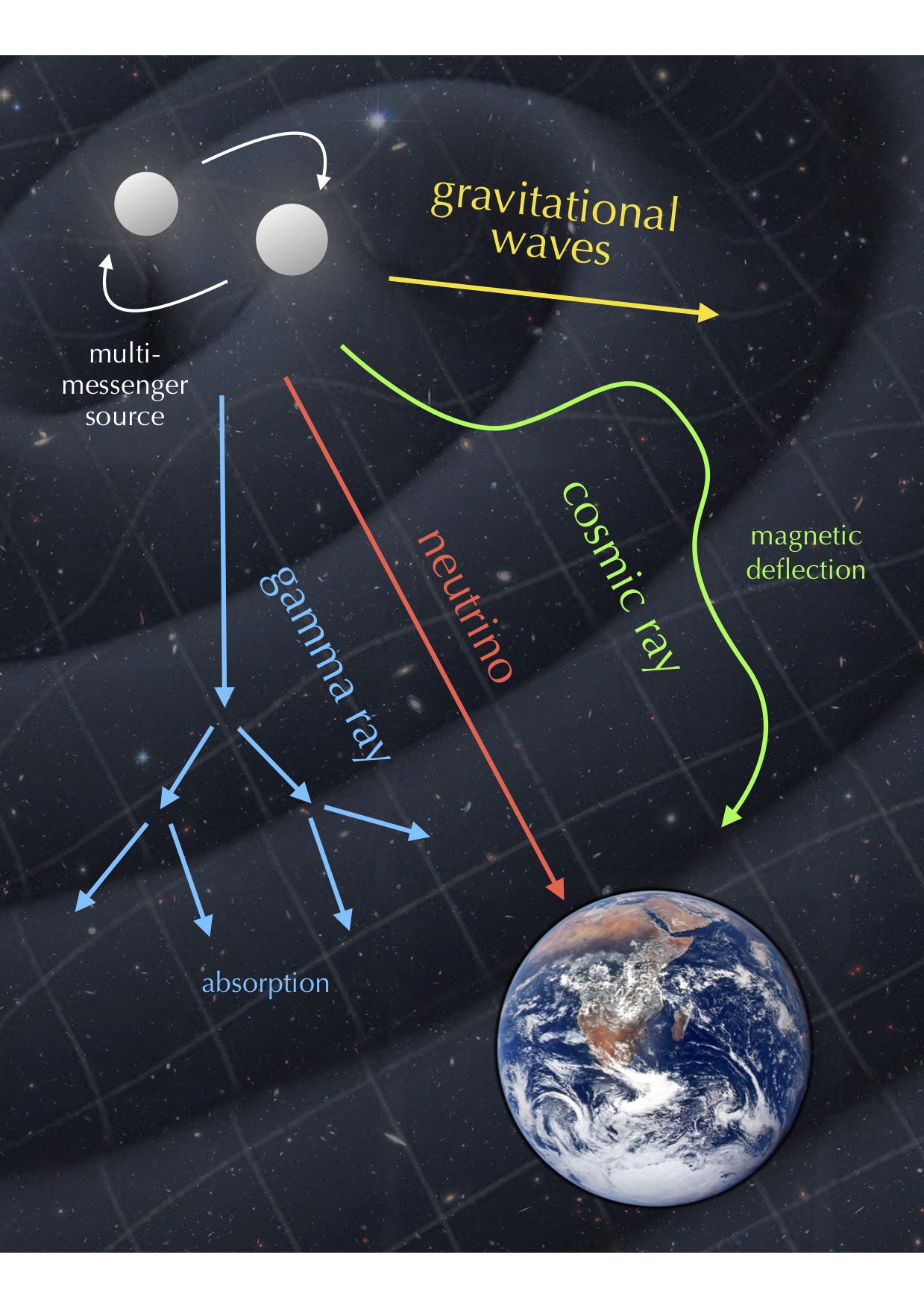 Over the last few decades, our view of the Universe has expanded to incorporate four astrophysical messengers, at high energies. These messengers are photons (in the form of gamma rays), neutrinos (observed by IceCube), gravitational waves (observed by LIGO-VIRGO) and cosmic rays.

Among the most extraordinary phenomena in our Universe is the existence of very high-energy radiation in the form of cosmic rays, γ-rays, and neutrinos. The record holders are cosmic rays with energies that can be ten million times higher than the energies achievable in accelerators like the Large Hadron Collider (LHC). We do not yet know where or how particles are accelerated to these extreme energies, and neutrino astronomy is a key to directly solving this puzzle. The rationale is simple; cosmic rays collide with gas and radiation at various stages: both during their relatively brief acceleration in their sources, and while propagating over cosmic distances for hundreds of millions of years until they reach us observers. A “smoking-gun” signal of such interactions is the production of high-energy neutrinos.

An interesting comparison of neutrino, cosmic rays and gamma ray fluxes can be made by plotting their respective measured fluxes on the same scale (see figure below). The observed neutrino flux φ is summarised in the figure in terms of the product (energy)^2*φ, which is a measure of its energy density. One can see that the cosmic energy density of high-energy neutrinos is comparable to that of gamma-rays observed with the Fermi satellite (blue data) and to that of ultra-high energy cosmic rays observed, e.g., by the Auger observatory (green data). This might indicate a common origin of the signal and provides excellent conditions for multi- messenger studies. We highlight three mechanisms that are studied in our group:

The observed diffuse flux of neutrinos, gamma rays and cosmic rays has been shown to be of comparable magnitude. This apparently shared energy scale is the main motivation behind the search for a common origin between these three messengers.

A: The joined production of charged pions and neutral pions in cosmic-ray interactions leads to the emission of neutrinos (dashed blue) and gamma-rays (solid blue), respectively. What does gamma-ray observations tell us about the neutrino emission?

B: Cosmic ray emission models (solid green) of the most energetic cosmic rays imply a maximal flux (calorimetric limit) of neutrinos from the same sources (green dashed). Is there a deep connection between these unknown CR sources and the recent IceCube observation?

C: The same cosmic ray model predicts the emission of cosmogenic neutrinos from the collision with cosmic background photons (GZK mechanism). What are the requirements for future neutrino observatories to reach this low flux of cosmogenic to test the GZK mechanism?

The arrival directions of Galactic cosmic rays show no strong preference for a preferred direction. This is expected from the presence of turbulent magnetic fields in our Galactic environment that repeatedly scatter charged cosmic rays during propagation. However, various cosmic ray observatories have identified weak patterns in the arrival direction distribution (``anisotropies’’) of various angular sizes. These anisotropies are tiny: at most 1 out of 1000 cosmic rays shows this atypical behaviour. IceCube observes about 100 billion muons per year and, based on this enormous data, can study cosmic ray anisotropies to a very precise level.

Our group is involved in cosmic ray anisotropy studies on various levels. The extraction of small anisotropies is difficult and has to account for systematic uncertainties related to detector effects. We have developed sophisticated analysis methods that allow to compensate for these effects. These methods have recently applied in a joined anisotropy analysis of IceCube and HAWC – a water Cherenkov observatory located in Mexico. The result of this study allows to study the 10TeV cosmic ray anisotropy over a large fraction of the sky due to the complementary field of views of the experiments. 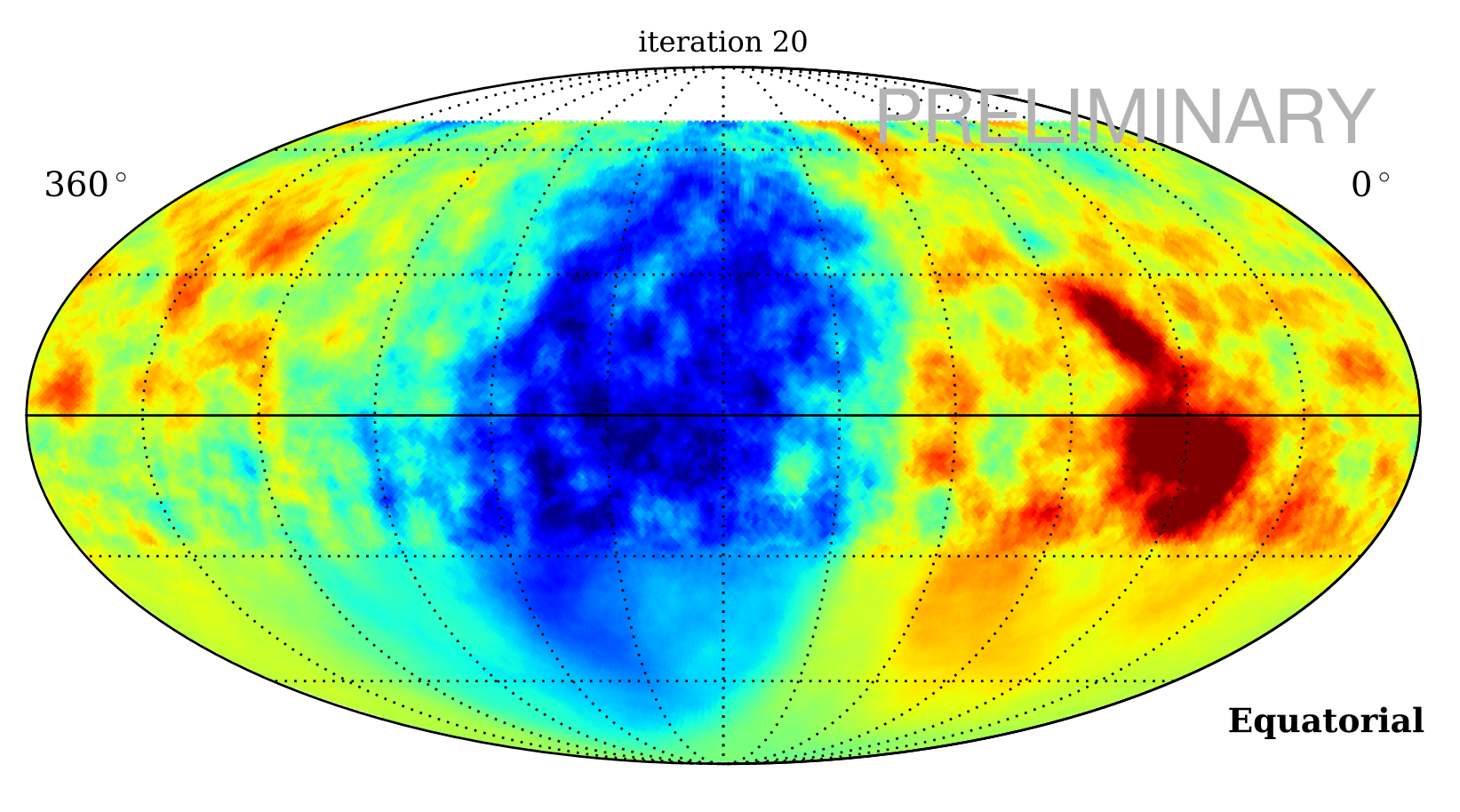 The large scale dipole anisotropy in the cosmic ray flux

A large scale dipole anisotropy in cosmic ray data is expected from diffusion theory and the relative motion of the observer with respect to the cosmic ray reference frame (Compton-Getting effect). The combined observation of dipole anisotropies in the TeV-PeV range show some surprising features, including a rapid change of orientation at 100TeV. We are working on interpretations of these features. Recent observations including IceCube show that the amplitude and phase of the dipole anisotropy can be interpreted as projection effect onto the local magnetic field axis (see plot below). The energy dependence of the “phase-flip” can be interpreted as the ceasing dominance of a local source, possible the Vela supernova remant. 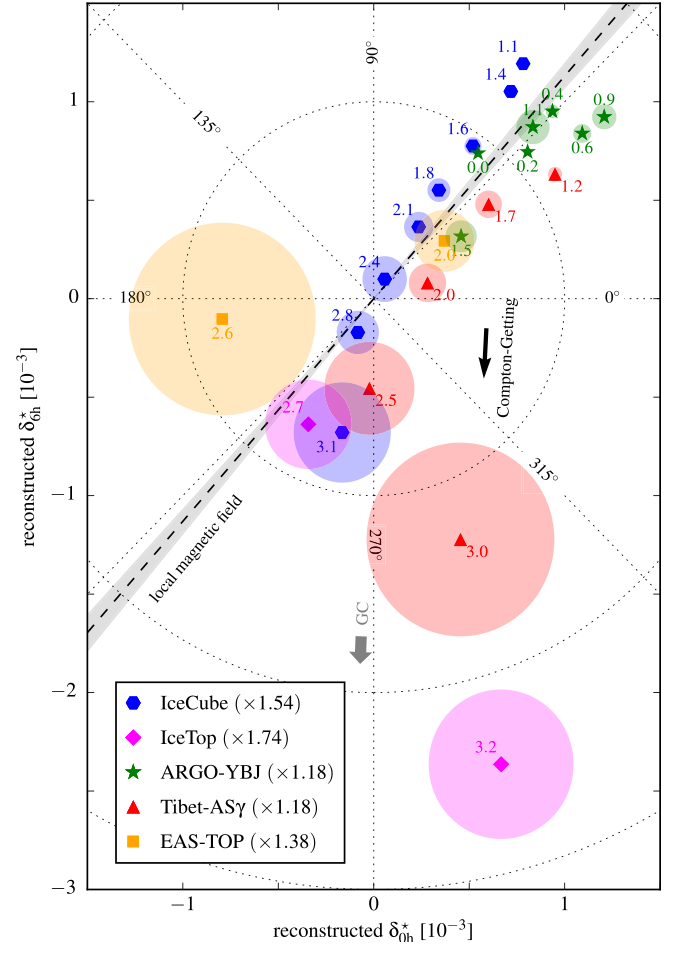 IceCube has also identified the presence of small-scale anisotropies that have been resolved to the level of 10 degrees. The origin of these feature is unknown. We have been working on models that account for these features by cosmic ray scattering in randomly oriented magnetic field perturbation in our local environment. Within this model, it is possible to reproduce the power spectrum of the anisotropy via analytical arguments and also numerical simulations