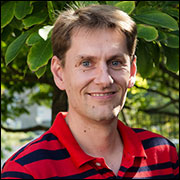 1999: Master of Science in physics and chemistry, University of Århus.

2007:Silver medal and price of Dkr 100.000 from the Royal Danish Academy of Sciences and Letters. The medal is awarded each year to a under the age of 40. The recipients alternate between science and humanities.

New methods to implement quantum gates between trapped ions. We developed the theory for a new method to implement quantum gates between different trapped ions in an ion trap. The gates we developed have been very successfully implemented in a number of ion trap laboratories around the world, and is currently the preferred method in most experimental groups. Our theory thus form the foundation of the most advanced experimental system for quantum computation.

Quantum optics with surface plasmons. We showed theoretically that a single emitter placed near a metallic nanowire form an ideal system for controlling single photons. The coupling thus obtained enables an efficient coupling of single emitters and single photons. Furthermore it can be used to obtain strong optical nonlinearities at the single photon level, paving the way for applications such as single photon
transistors. The ¿rst experiments have con¿rmed these theories and further experiments are underway in a number of places.

Optimizing quantum memories. Quantum memory for atomic ensembles is pursued in a number of laboratories around the world, but only a limited efficiency is achieved. We developed the theory for how to achieve the optimal efficiency given the available experimental resources, and this has subsequently been used to increase the efficiency achieved in experiments. In addition our theory provided a simpli¿ed and unifying picture of the underlying physics in these experiments.