The group works with experimental setups in the laboratory, focusing on new ways to generate ultra stable frequency references with cold atoms or molecular gases. Here, atoms are trapped in magnetic fields, where they are held by precise beams of laser light and are cooled down to near absolute zero, minus 273 degrees Celsius.

The result is an atomic clock, a technology that is now so precise that it only loses one second over the entire 13.8 billion year lifetime of the universe. In the Quantum Metrology group we investigate the properties of such atomic clocks and work to improve them or develop the next generation systems. We focus especially on Cavity-enhanced systems and Cavity-QED. 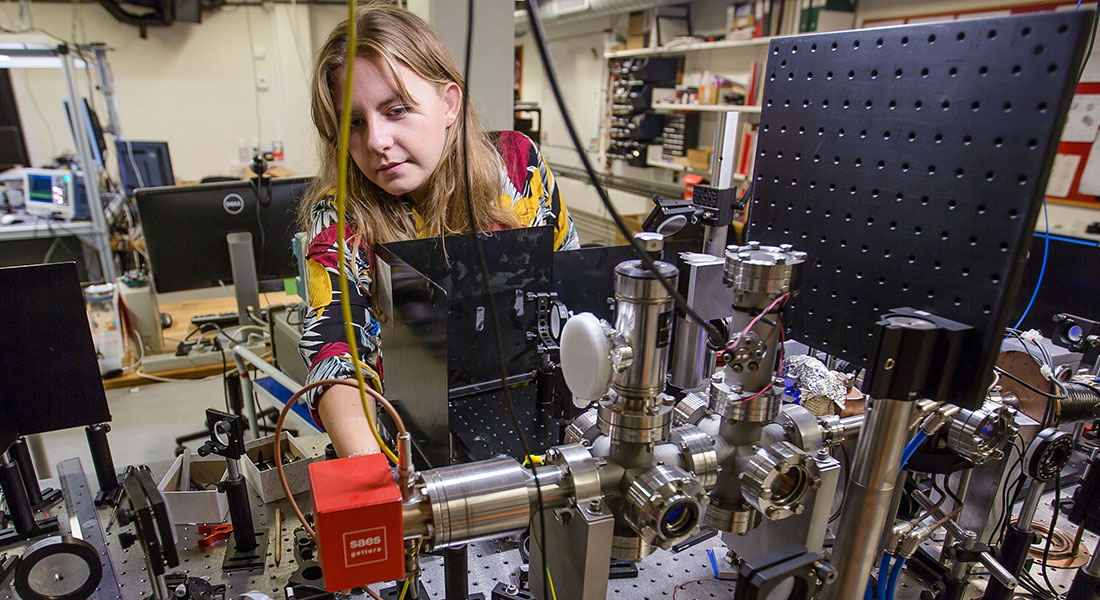 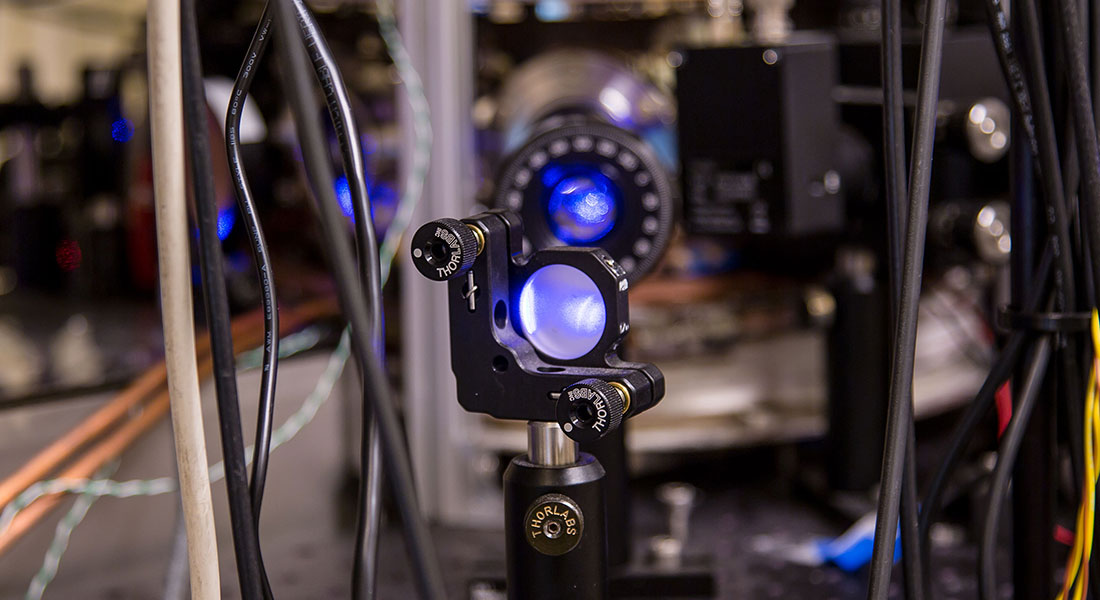 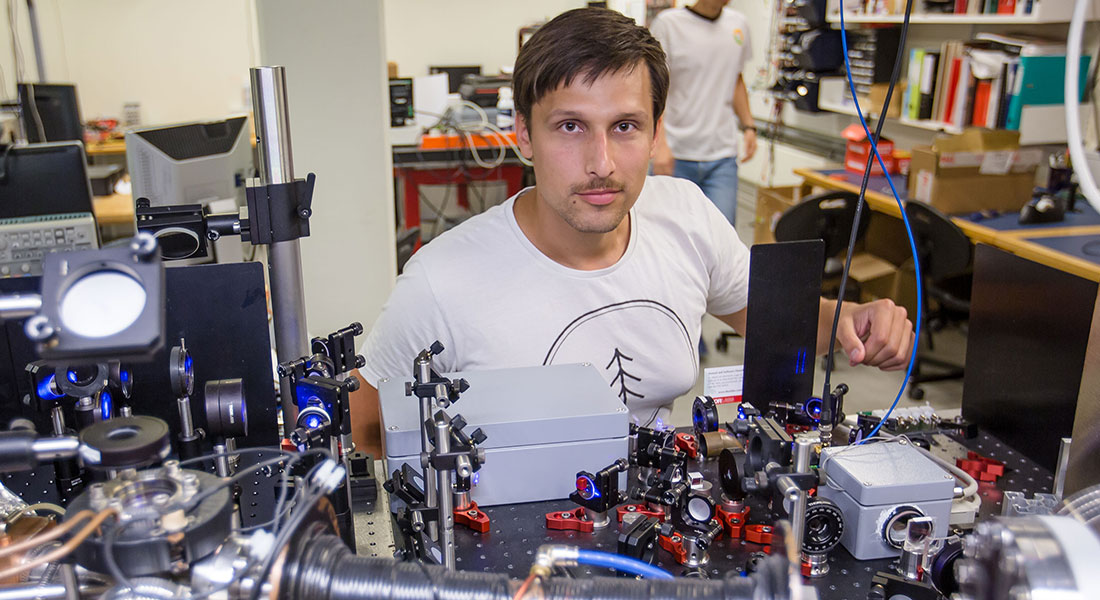 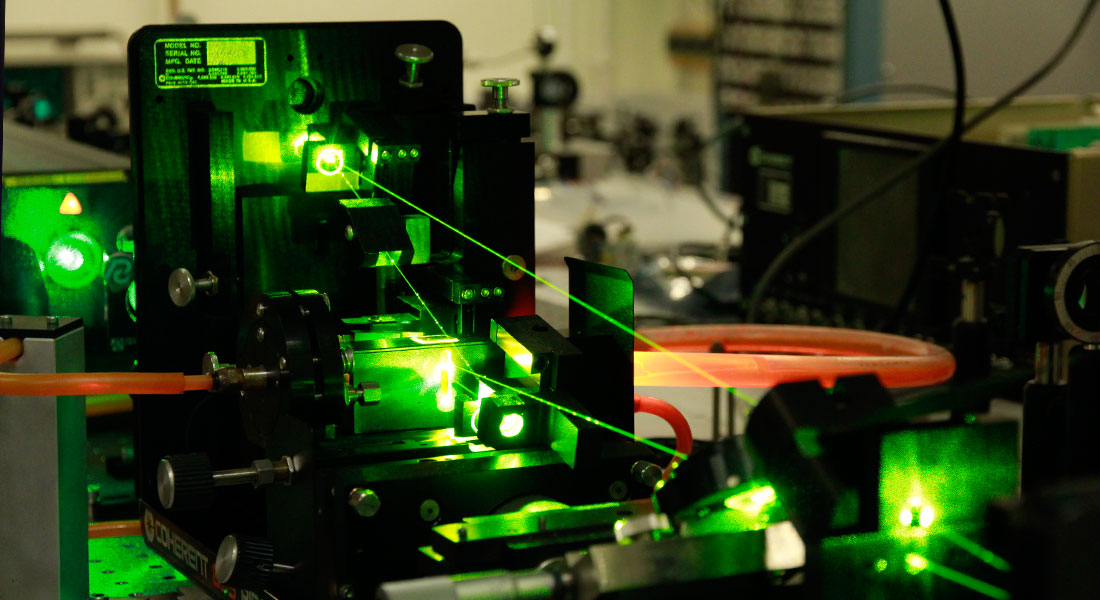 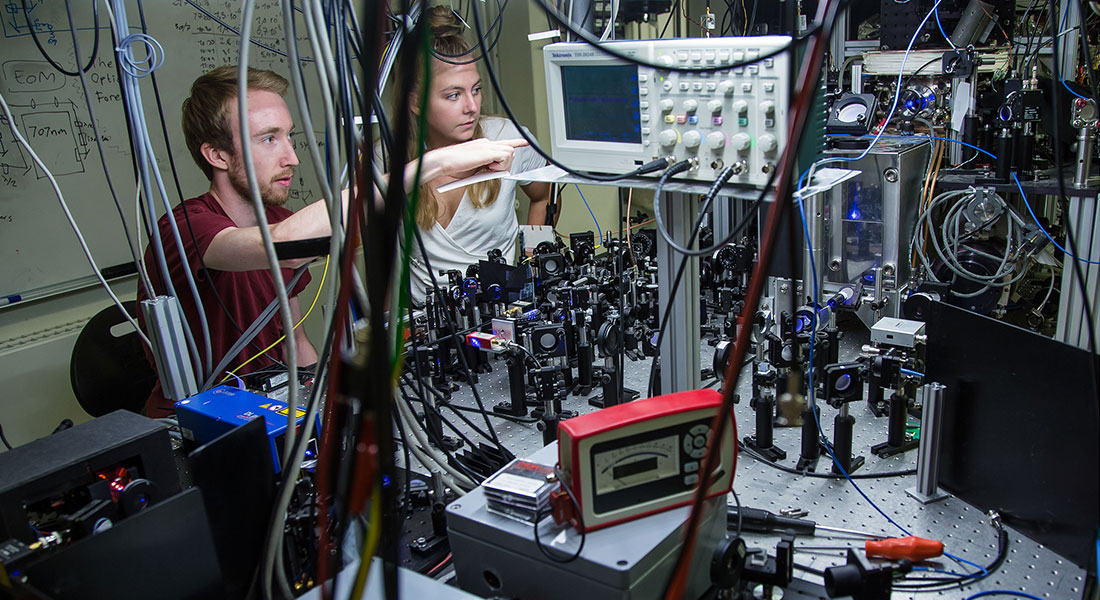 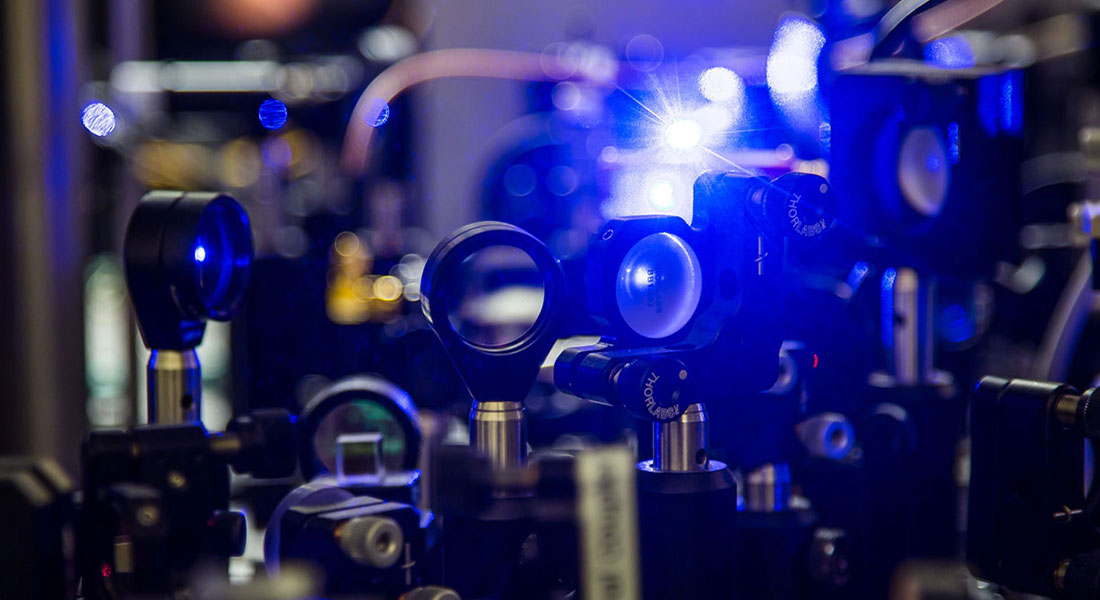 The group works with experimental setups in the laboratory, where the atoms are trapped in a magnetic field. Here they are held by precise beams of laser light and are cooled down to near absolute zero, minus 273 degrees Celsius. They use different atoms for the experiments, for example, strontium, magnesium or ytterbium, which all have two electrons in the outer shell, giving them particular quantum mechanical properties.

These quantum mechanical properties are used for research on an ultra-precise atomic clock. An atomic clock is comprised of atoms, here strontium, which are captured and manipulated using laser light. An atom consists of a nucleus and some electrons that move in clearly defined orbits around the nucleus. By using focused laser light you can get the electron to jump back and forth in a well defined way between these orbits. It is this that forms the pendulum in the atomic clock.

The result is an atomic clock that is now so precise that it only loses one second every 300 million years, but physicists are working to make it even more precise and this has great potential. Looking towards the Earth, you will be able to measure the tiny movements of continental drift and this could perhaps give geophysicists a new tool to predict earthquakes. Looking towards space, you could use atomic clocks for space-based optical interferometry, which can be used to search for gravitational waves, planets orbiting other stars than the Sun, or drift of physical constants.

Experimental research in atomic physics and quantum optics is immensely costly. Delicate optics and advanced laser technology are often only produced in single or few copies.

This makes the price very high and the manufacturing process complicated. In addition, all state-of-the-art experimental equipment is build by ourselves from scratch, an effort that requires a certain critical mass in terms of man-power and advanced scientific test equipment.

We gratefully acknowledge financial support over the years from the following sources:

More scientific publications by the group >>

Interested in doing your masters project in the area of Atomic, Molecular and Optical (AMO) physics?

In the Quantum Metrology group we have several available Masters projects. We are looking for driven and ambitious master students to do these projects in close collaboration with Ph.D.-students.

The group has research projects within optical atomic, and molecular clocks, as well as Cavity Quantum Electrodynamics (CQED) and optical frequency-combs in Silica waveguides.

In collaboration with the European Space Agency and as part of the Qbiz-center at NBI and the SPOC center of excellence at DTU, we seek to improve small, compact and robust molecular clocks. The main goal is to create ultra-precise clocks that may be used in future missions as well as in technological applications such as high speed optical communication and large network synchronization. In these projects we employ molecules such as iodine (I2) or acetylene (C2H2) placed inside optical cavities. Our group has recently demonstrated a technique that greatly enhances the stability of optical clocks by combining atoms and optical cavities. We are developing this method further and wish to apply it to molecular samples. The projects are experimental and will involve optics, quantum optics, physics of molecules, laser physics, measurement and control.

In collaboration with the European Space Agency and as part of an EU-wide collaboration on atomic clocks, we seek to generate frequency stable laser sources. The main goal is to establish an ultra-stable reference laser, a so-called local oscillator, which may be employed in state-of-the-art optical atomic clocks.

We follow several different approaches to this end, and currently have two active experiments using cold strontium atoms. In both experiments we have the possibility of following a strategy with the atoms acting as passive or active components in obtaining the narrow spectral features we are after.

The passive approach uses the atoms inside an optical cavity as a frequency discriminator, whereas the active approach uses the quantization of the atoms and coupling field to achieve so-called superradiant lasing. In superradiance a large group of excited atoms placed closely together may phase lock and give of a burst of light on time scales significantly below the natural life time of the excited state. This phenomenon may be enhanced by placing the atoms in a high finesse cavity and may lead to exceedingly narrow frequency references. Furthermore, rather than being a single burst of photons, we contemplate to generate a continuous superradiance by employing a beam of atoms. The project is experimental and will involve fundamental quantum physics, optics, quantum optics, atomic physics, laser physics, measurement and control.

Please contact Jan W. Thomsen at jwt@fys.ku.dk if you are interested in doing a project with us, or want to hear more about them.

Bachelor and Master Project opportunities
Please contact Prof. Jan W. Thomsen at jwt _at_ nbi.ku.dk if you are interested.

PhD positions
We currently have an open position within the Marie Sklodowska Curie ITN: MoSaiQC. Visit the MoSaiQC website.

Please contact Stefan A. Schäffer at schaffer _at_ nbi.dk for more information. Apply for the position here: Job portal

PostDoc positions
We are currently looking for an excellent postdoc for a 3-5 year position. Please contact Prof. Jan W. Thomsen at jwt _at_ nbi.ku.dk if you have the right background. 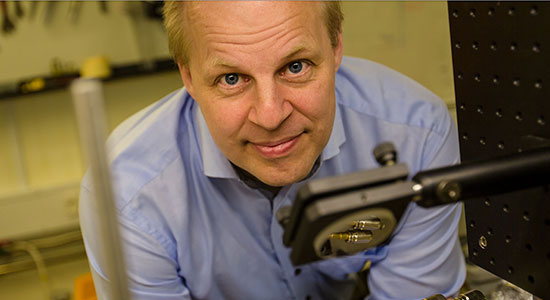 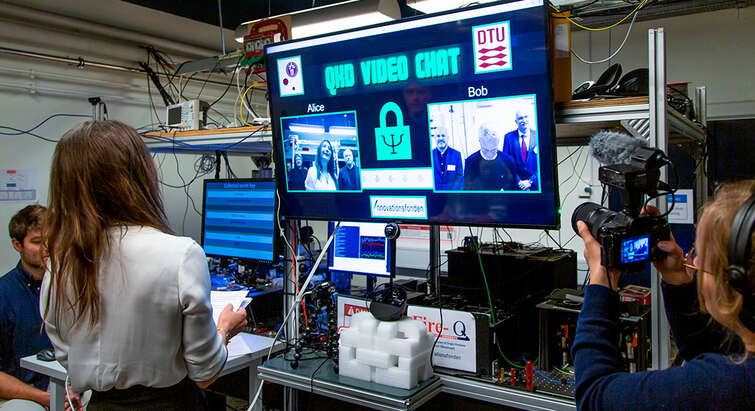 On 22 November, DTU and the Niels Bohr Institute successfully demonstrated an absolutely secure… 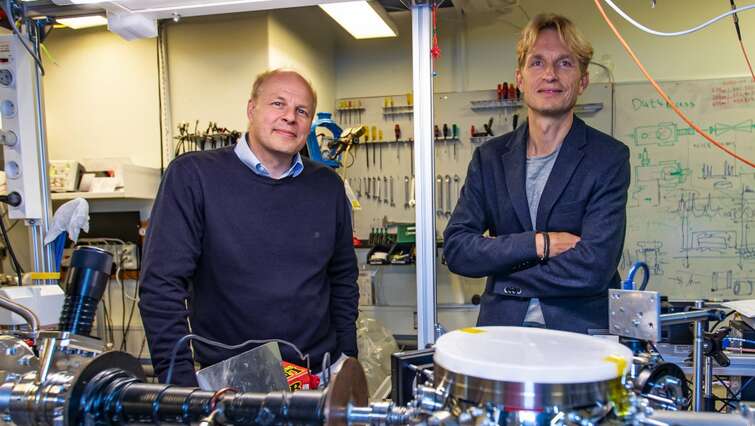