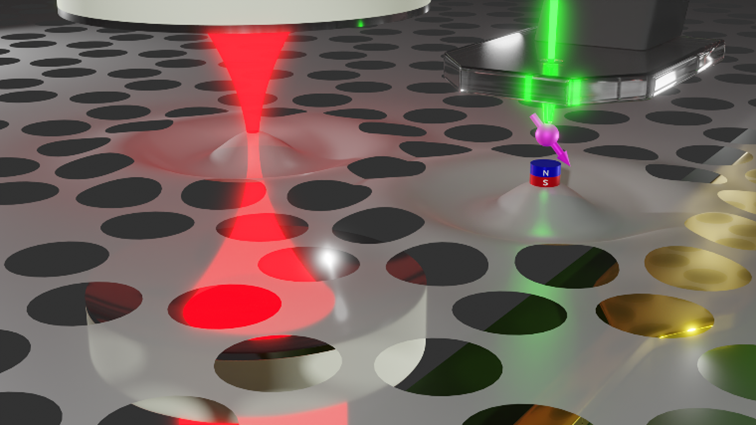 Hybrid quantum systems, such as the textbook example of optically active 2-level systems coupled to cavity photons, are relevant for quantum technologies and foundations of quantum mechanics. Coupling a spin, which is an inherently quantum object, to a mesoscopic mechanical resonator could be used to enter a regime previously unattained in quantum optomechanics, which could ultimately lead to the generation of non-classical states of motion in a millimiter-sized membrane.

In this project, we aim to couple our highly coherent mechanical resonators to the spin of nitrogen-vacancy (NV) centres in diamond. To achieve this, the resonator is functionalised with nanomagnets, which mediate the spin-mechanical coupling. By using a confocal microscope with single-photon sensitivity, the spin state can be initialised to its ground state and optically read out, while an antenna generates microwave pulses used to manipulate the spin. The mechanical resonator can then be used either to read out or to induce spin flips in the NV centre. The high degree of coherence of both systems allows to engineer a platform to explore coherent spin-mechanical interactions.

This research combines aspects of experimental and theoretical quantum optics, optomechanics, and uses techniques of confocal and atomic force microscopy.