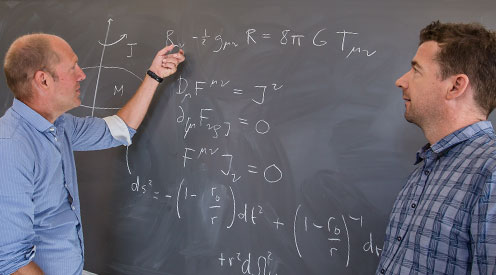 The project is led by Troels Harmark and Niels Obers.

Our research activity is supported by Danmarks Frie Forskningsfond and the Villum Foundation. We also have strong collaborative ties with partners at universities in Amsterdam, Berkeley, Crete, Groningen, Edinburgh, Leiden, Paris, Perugia, Reykjavik, Stockholm and Utrecht.

Recent years have seen a surge of interest in applying Newton-Cartan (NC) geometry and its torsionful generalization to the study of non-relativistic aspects of field theory, gravity, string theory and holography. The development of NC geometry has established a framework  for a covariant formulation of physics in non-relativistic limits, large speed of light expansions as well as null reductions, which has already generated numerous novel insights.

Very importantly, non-relativistic string theory appears to be related to limits of the AdS/CFT correspondence, which provides a clear connection between non-relativistic physics and the holographic principle. In particular, it connects to Spin Matrix Theory (SMT), which is a quantum mechanical theory obtained by considering near-BPS limits of the AdS/CFT correspondence. Importantly, SMT represents a tractable sector of AdS/CFT in which quantum gravity effects are expected to be easier to compute.

SMT is a specific and well-defined quantum mechanical theory with a hilbert space and hamiltonian. We are working under the assumption that SMT on its own provides a realization of the holographic principle, and one should thus be able to study the emergence of (quantum) gravity using this theory. We have already found that strings and D-branes can emerge from SMT.

There are also interesting field theory applications of NC geometry. These include non-relativistic effective field theories and hydrodynamcis that are for example relevant to condensed matter and biological systems.